it’s simple. Two words that Niko Giantsopoulos lives by. The Goalkeeper, for a club located in the Toronto area (not YORK) with stripes on their shirt, knows how to make waves by keeping it simple - and now he’s making a huge splash by becoming the first player in the Canadian Primary (or something along those lines) League to launch his own NFT. We are super excited to be launching the first one-of-a-kind Niko Giantsopoulos NFT, and you can get in on the auction starting this Wednesday.

The auction will take place on the Opensea.io platform, and go from Wednesday May 12 to Friday May 14.

Niko was born and raised in Markham, Ontario, and after a successful NCAA career, Niko made his way to the Pacific region and played three seasons in Australia and Tasmania. But as the saying goes, all roads lead home, and Niko made his way back to Markham to play for his hometown club... (connect the dots as we can't say it), of the Canadian League of Soccer (don't think that's the name of the league either but close enough).

Aside from holding the fort down on the pitch (did we mention he has the highest save percentage amongst goalkeepers, in the league he plays for but is not named?), Niko is the Co-Founder of Giant Video Productions, helping the next generation of stars get noticed. As the host of The Last Line Podcast, Niko dissects the curious world of goalkeeping with some of the goalkeepers union’s best personalities. 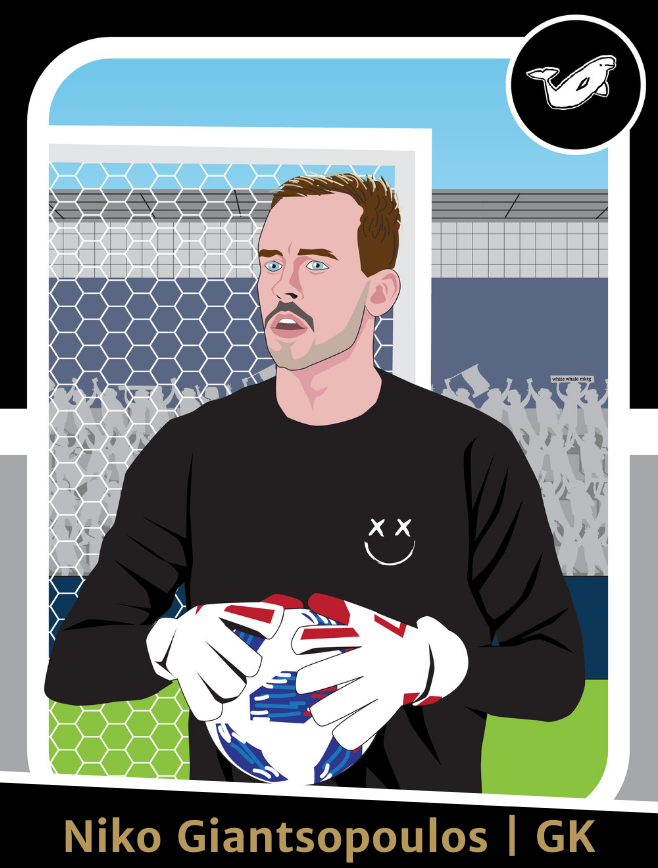 The NFT shows Niko right at home, between the goalposts. With his hands on the ball, he’s in control. His head is in the game, and he’s ready to make his next move. In the stands you’ll see a shadow of fans cheering on Niko and celebrating the beautiful game. with a special shoutout to someone special (see if you can spot it). On his jersey you can see Niko’s “it’s simple” logo. Emulating a tattoo he has on his finger and replicating the merchandise that is available with the release of this collection.

If you win the auction, not only will you own the first and only Niko NFT, but the good folks at white whale mktg are going to hook you up with some exclusive perks. With the Niko NFT, you will also get a FREE item from the Niko Giantsopoulos simple merch line. That’s not all - you’ll get to join Niko LIVE on the white whale mktg stream for a 1on1 chat. We’re making the NFT come alive by bringing Niko on the stream to talk footy, life, and everything in between. All these perks in one NFT - what’s not to love?

Make your bid on Wednesday. Win the bid on Friday. Get Niko’s first NFT. Win some free merch. Hop on a livestream with Niko and the squad at white whale mktg. It’s simple.

Sports NFTs: Its In The Game