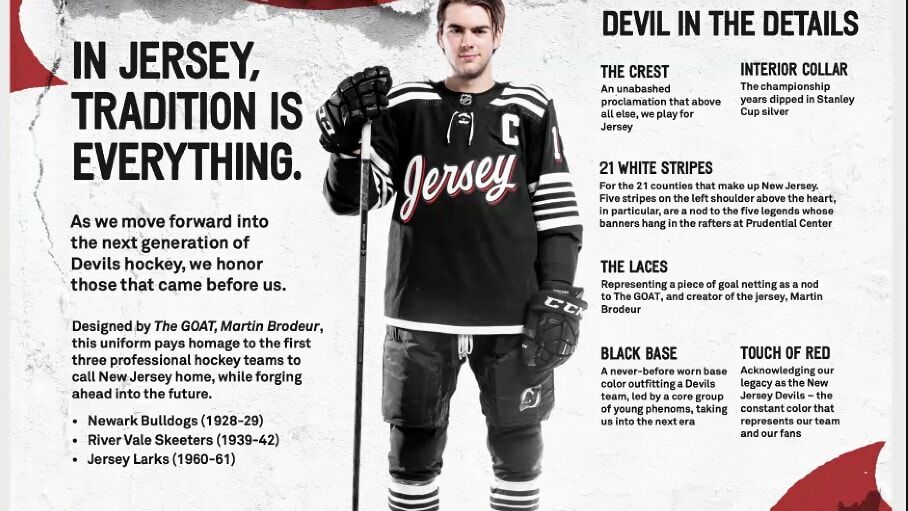 A picture says 1000 words. In this case, it says one. Jersey. The New Jersey Devils of the NHL launched their new third jersey it is also the first time they’ve released a jersey that didn’t pay homage to their history or the traditional ‘NJ’ with devil horns and tail logo. With that, it’s caused some conversation.

First, let’s talk about the jersey. It’s… interesting. To be honest, I don’t hate it. I kind of like it. It’s different and I believe that’s the purpose of third jerseys. Third or alternate jerseys allow clubs the chance to try something new and create a new talking point for the brand. I believe in this circumstance the Devils have done exactly that. The black and white are crispy, and the word ‘jersey’ across the chest makes you want to know more. Is this just another piece of fashion that is stating the obvious? Is this even a professional sports team? All of which strike a chord with different audiences. Non-hockey fans will be repping it as it’s a piece of fashion they’d like to add to their collection, children will want to wear it because it’s new and something mom or dad wouldn’t wear, and last but not least, Devils fans will rep it because it’s their team.

Now that we’ve made the case of why people should stop hating on the jersey so much, I do have one bone to pick with the marketing team at the Devils. We all know that the design behind the jersey is not that deep. It’s not historic. It’s not classic. And, it’s for sure not traditional. Therefore, when launching the jersey why try to paint it that way? There’s a graphic they released where it defines every aspect of the jersey and how it ties back to the franchise. 21 white stripes for the 21 counties, colonies, whatever in New Jersey, the lace in the sweater is no simple string BUT hockey lace… Really? If you’re going to launch a jersey that’s simple and different, ride it out. Be cool. Release the jersey, and when asked why? Simply respond with “it looks cool”.

With a cool look, you should launch it in an innovative way. Step away from the typical NHL launch that puts your young stud in the jersey whilst creating all sorts of meaningless ties that have created an ugly knot. Release it at fashion week. Make a piece of content where designers or streetwear influencers come into a focus group and provide their opinion on the piece. Don’t connect it to the Devils at the start, but just say it’s from an up-and-coming designer from the area called NJ De-Vals. Once they say how interesting and different it is, cut to a designer like a commercial. Something you’d see an Italian brand put out. All sorts of models walk down different streets wearing the jersey and cutting to each frame with a new and different angle. In the end, have the screen go black and white font appears saying: