“Success comes to those with the courage to fail in its pursuit.” Words spoken to his teammates after the Canadian Premier League Island Games in September 2020. Inspirational words that Ben lives by everyday. Words that Ben keeps in his mind everyday as his exciting professional career continues, and with exciting news. Here at white whale mktg we are super excited to announce the release of the one-of-a-kind Ben Fisk NFT, releasing this week. The auction will take place on the Opensea.io platform, starting Wednesday, May 12th and closing Friday, May 14th.

Ben Fisk grew up in East Vancouver, BC and began playing soccer from a young age. With immense talent from a young age, Ben spent his youth career for the Vancouver Whitecaps academy, before taking his talents to Spain, Edmonton, AB, and Northern Ireland, marking the start of his professional career. Ben returned home in 2019, for the inaugural season of the Canadian Premier League in his home province for Pacific FC in Victoria, BC. In 2020 Ben made his move to the nation’s capital, becoming the historical first player and captain for Atlético Ottawa. 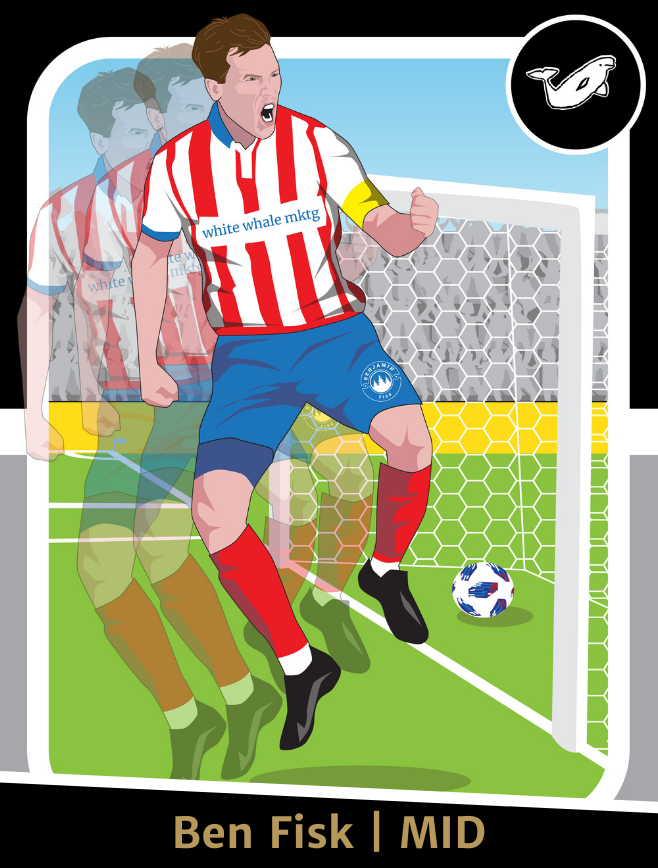 Ben left his mark with Pacific FC, making 26 appearances in the 2019 season, bagging 6 goals and contributing 4 assists. The following season, Ben played in all 7 Atlético Ottawa matches at the Island Games in PEI. Ben impressed in Atlético’s first ever season and exceeded all expectations, while leading the lineup and proving his immense leadership.

The NFT shows Ben in an amazing moment during the 2020 CPL Island Games, in Ben’s favourite position to be in: scoring goals. Scoring the first goal of the game in Ottawa’s 2-0 victory over reigning fall and spring champions, Cavalry FC. The NFT shows Ben in celebration, exemplifying his wondrous passion for the beautiful game. With a ball at his feet and goal in his sight, there’s nothing better in the world.

If you win the auction, not only will you own the first Ben Fisk NFT, but you’ll also receive some exclusive perks. With the purchase of the NFT you’ll get to virtually meet Ben over a 1 on 1 stream and an item of your choice from the Ben Fisk NFT merchandise collection. All these perks in one NFT - what’s not to love?

Make your bid on Wednesday. Win the bid on Friday. Get Ben’s first NFT, hop on a livestream with Ben and the squad at white whale mktg, and get insane bragging rights -  It’s simple.