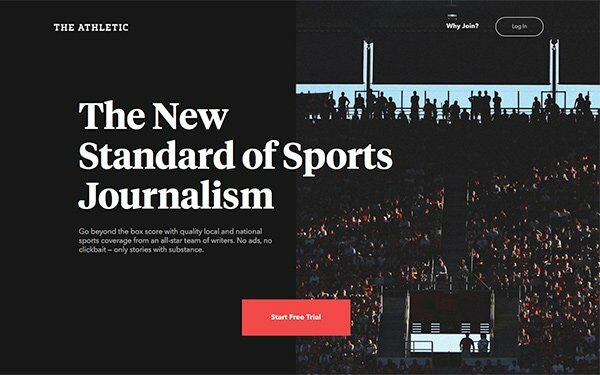 The phrase “New Year, New Me” is something you hear often this time of year when people make commitments to resolutions that may or may not last beyond the time this newsletter was sent to your inbox. For The Athletic, a subscription-based sports journalism platform - that statement will be more true than ever. Just yesterday, it was announced that The Athletic had agreed to be acquired by The New York Times Company, in a deal valued at a reported $550 million.

The Athletic was founded in 2016, by Alex Mather and Adam Hansmann (former employees at Strava). Their goal was simple - to provide in-depth sports coverage without ads for the diehard sports fan. Focusing on a subscription model for revenue rather than advertising, the platform has grown to include over 47 markets across a plethora of sports. In addition to the long-form pieces and quality journalism subscribers sign up for, they also have a line of exclusive and partnered podcasts.

The company has disrupted the sports journalism space and boasts a strong team of over 400 journalists and contributors that focus on both local markets and league-wide coverage. Their business model has been very popular amongst North American and British sports fans, totaling over 1.2 million subscribers. However, the profitability of the company has been questioned many times - with reports suggesting that The Athletic has yet to turn a profit, as their expenses are greater than their annual revenue. Though common for digital media properties (including Netflix), the profitability issue has resulted in the deal coming in about $200 million shorter than The Athletic’s initiation valuation of $750 million.

In a press release posted on The Athletic, founders Mather and Hansmann ensured subscribers that nothing will be changing for subscribers at this time. Many users have expressed concern on social media and even in the comments under the piece - worried that The New York Times Company may cannibalize their beloved platform and make unwelcome changes to improve the company’s bottom line.

For The New York Times Company, this acquisition continues its expansion into the digital media space, with a goal to reach 10 million subscribers by 2025. As on-demand media continues to encapsulate every aspect of our content, The New York Times Company will hope to be a market leader in the on-demand journalism/digital media space. It remains to be seen how The Athletic will be integrated into the New York Times platform, if at all. For users of either platform and readers of sports news all over - this is a development to keep an eye on as it continues to shape the type and medium of the sports content we consume daily.